This unique booklet breaks down 10 Chinese characters to their most basic form, telling the story of a creator God, His purposes in creating mankind, plans for man’s salvation, and an opportunity to exercise faith in this loving God.

10 booklets per pack (discounts based on number of packs)

A Unique Way to Reach Your Chinese Friends!

The oldest ideographic forms of Chinese were carved on bones and tortoise shells. They were first discovered during the late Shang Dynasty, around 1300 BC. Scholars in China and Asia have spent many years studying these bone oracle characters and many books have been written on them.

This booklet is unique in that, by breaking down ten characters to their most basic form, they tell the story of a creator God: his purposes in creating mankind, plans for man’s salvation, and an opportunity to exercise faith in this loving, amazing God!

What this booklet’s objectives are:
● To tell the salvation story through the ancient and modern Chinese characters as its etymological roots reveal startling correlations with the Bible.
● To give readers a chance to respond to the invitation to receive Jesus Christ via the culture of the Chinese language.
● Allow people to ask questions about Jesus Christ.

This booklet does not:
● Question the historicity of the Chinese language.
● Prove definitively that all bone oracle characters can only be interpreted this way, however when you study more characters, the correlations are persuasive.
● Present a Westerner’s perspective of the Chinese characters as these discoveries were made by Chinese scholars in China and in South-East Asia. 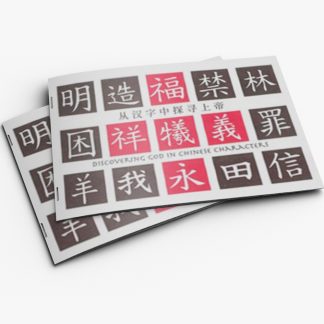 You're viewing: Discovering God in Chinese Characters $10.99
Add to cart